My encounter with the UAE fuzz

So I'm in the U.A.E. these days, and I've been meaning to make some posts on random things that have happened so far but haven't gotten around to it. But I did want to put this one up because it was kind of funny.

At road construction projects that are on highways outside of major cities, the construction crews will routinely put up sizable speed bumps to keep people at a more reasonable speed (~10 km/hr) through the construction zone. These are well marked, but still it's not the sort of thing you expect to encounter when driving 140 km/hr down the highway. So a few km before the site, they put these signs: 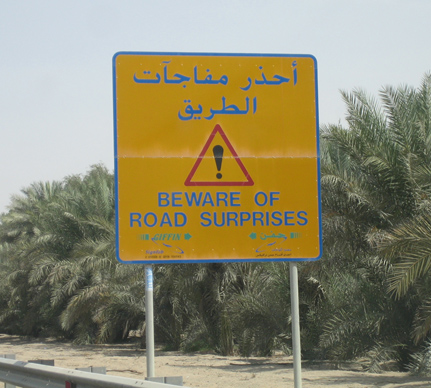 ... which conjure up amusing images of people in dishdashas jumping out from the bushes and yelling "Surprise!" or something. Or maybe it's just me.

At any rate, I thought the sign was sort of amusing, so I stopped the car and got out to take a picture. I was out of the car for maybe 4 or 5 seconds when a police car drives up and parks behind me.

As a quick aside, people react to police very differently here than they do at home. Around Atlanta, when a cop drives by everyone's foot instinctively goes for the brake pedal, even if they're parked. Here it's different; the police have no interest in you unless there are bullets flying from your car. You can blow past a cop going 3 times the speed limit and they don't even bat an eyelid. I don't know how this is relevant to the story, but I just wanted to point it out.

Anyway. So I'm walking away from the car to take this photo and the cop steps out of his car. Then there's the following exchange:

Cop gives me a blank stare, then looks pointedly at the camera. I point at the sign; he looks at it, looks at me, and says "uh..."
So I give him the international "just a minute" sign, turn around, and take the picture. Then I hold the camera out to him. He looks at me like I'm some sort of idiot, shrugs, gives me the international "no thanks, I just ate" sign, gets back in the car, and drives off. Kind of funny. I wonder how it would have went if he knew English.

Anyway. There's sure to be more wackiness, so stay tuned!